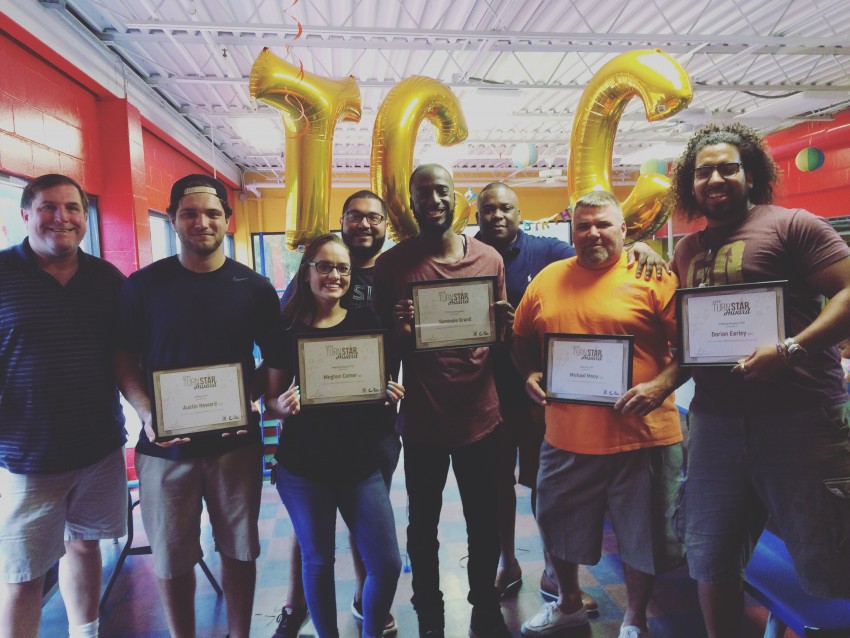 In the apartment industry, unit turnover is fast and furious. Often, some properties have only a week to prepare units for new residents. The Collier Companies has over forty-five apartments in Florida, Georgia, and Oklahoma. The staff at each Collier community has a limited amount of time to clean and prepare their entire property for the line of new tenants. After each ‘turn’ the company has a large party thanking the hardworking staff, and awarding those ‘stars’ that make turn a success. This year, The Collier Companies had three Turn Star parties covering all six regions. Awards were given to team members and vendors who received a nomination by their fellow team members. Award recipients receive a certificate showing their achievement.

The second Collier Companies Turn Star Party took place September 20, in Tampa, Florida. This party covered seven properties. The Office Team Member award winner was Samantha Ervin. Our Service Team Member Award recipient was Sean Leslie. The Rookie Team Member Award was given to Shawna Antunes. Our Helping Hands Award winner was Mark Wilkie. The Headquarters Team Member Award recipient was Ricky Brown. Our overall Community winner was Lakeview Oaks. The Tampa Region would also like to thank Moore’s Painting and Cleaning for their help in making Turn 2016 a success. The Tampa team members and their families enjoyed food and fun at AMF University Lanes during and after their awards.

The final award party took place September 21, in Gainesville, Florida. This party covered over fifteen properties in the city. After a word of thanks from The Collier Companies’ Founder and Chairman, Nathan S. Collier, the awards were presented. The Headquarters Team Member Award was presented to Michael Rosenblatt. Our Helping Hands Team Member Award winner was Anastasia Rivera. The winner of the Office Team Member Award was Cody Talcott. Our Rookie Team Member award was presented to Corin Norvell. The winner of the Service Team Member Award was Kyler Kirkland. The Overall Community Award winner was The Crossing at Santa Fe. This award ceremony also honored the top two leasers in Gainesville: Cera White and Schadre Dent. The Collier Companies and the Gainesville team members would like to thank Right On Time Home Repairs for their help in making this year’s turn a success. After the awards, the Gainesville team members enjoyed a night filled with fun and laughter at The Skate Station.